Sodium Bicarbonate Gold contains 1200 mg of sodium bicarbonate per vegetarian capsule. The body itself produces bicarbonate, but these stores can become depleted. A supplement can be used in addition. Ideal for athletes involved in high-intensity sports, such as sprinters, rowers, and swimmers.

Sodium bicarbonate, also known as baking soda or purification salt, has a wide range of functions. It is a commonly used rising agent in baking and is also an indispensable product used in cleaning. The body itself can also produce bicarbonate. However, these stores are not endless.
Nowadays, there is increasing interest from the sports world to supplement with sodium bicarbonate. We have therefore developed Sodium Bicarbonate 1200 mg Gold especially to meet this demand. This product contains no less than 1200 mg of pure sodium bicarbonate per vegetarian capsule.

When is it beneficial?

Sodium Bicarbonate 1200 mg Gold is ideal for sports in which frequent short bursts of high-intensity activity are required. Examples of these sports are swimming (100–400 m), running (400–1500 m), cycling (track and short distances), and rowing. Sodium bicarbonate can also be useful for athletes engaged in sports with intervals, such as team sports and martial arts.

Sodium Bicarbonate 1200 mg Gold is produced in accordance with the anti-doping standards and other standards of the NZVT system (Anti-Doping Authority for the Netherlands) and therefore displays the NZVT logo. Sodium Bicarbonate 1200 mg Gold can be used by top athletes with confidence, so that they can concentrate on delivering an optimum athletic performance with peace of mind.

Take around 300 mg of sodium bicarbonate per kilogram of body weight 120–150 minutes before starting exercise. A person who weighs 65 kg will therefore need 16 capsules (300 mg * 60 kg/1200 mg).
Take the capsules with plenty of water or with an isotonic sports drink. To increase absorption and reduce the risk of intestinal problems, the capsules can be taken with a carbohydrate-rich meal (1–1.5 grams of carbohydrates per kilogram of body weight).

The use of sodium bicarbonate may cause intestinal problems. Always try Sodium Bicarbonate 1200 mg Gold during a training session first before using it during a competition. If a single dose causes intestinal problems, the dosage can be split. The total intake is then divided into several doses during a period of 90–180 minutes, with the last dose taken 120 minutes before starting the activity. 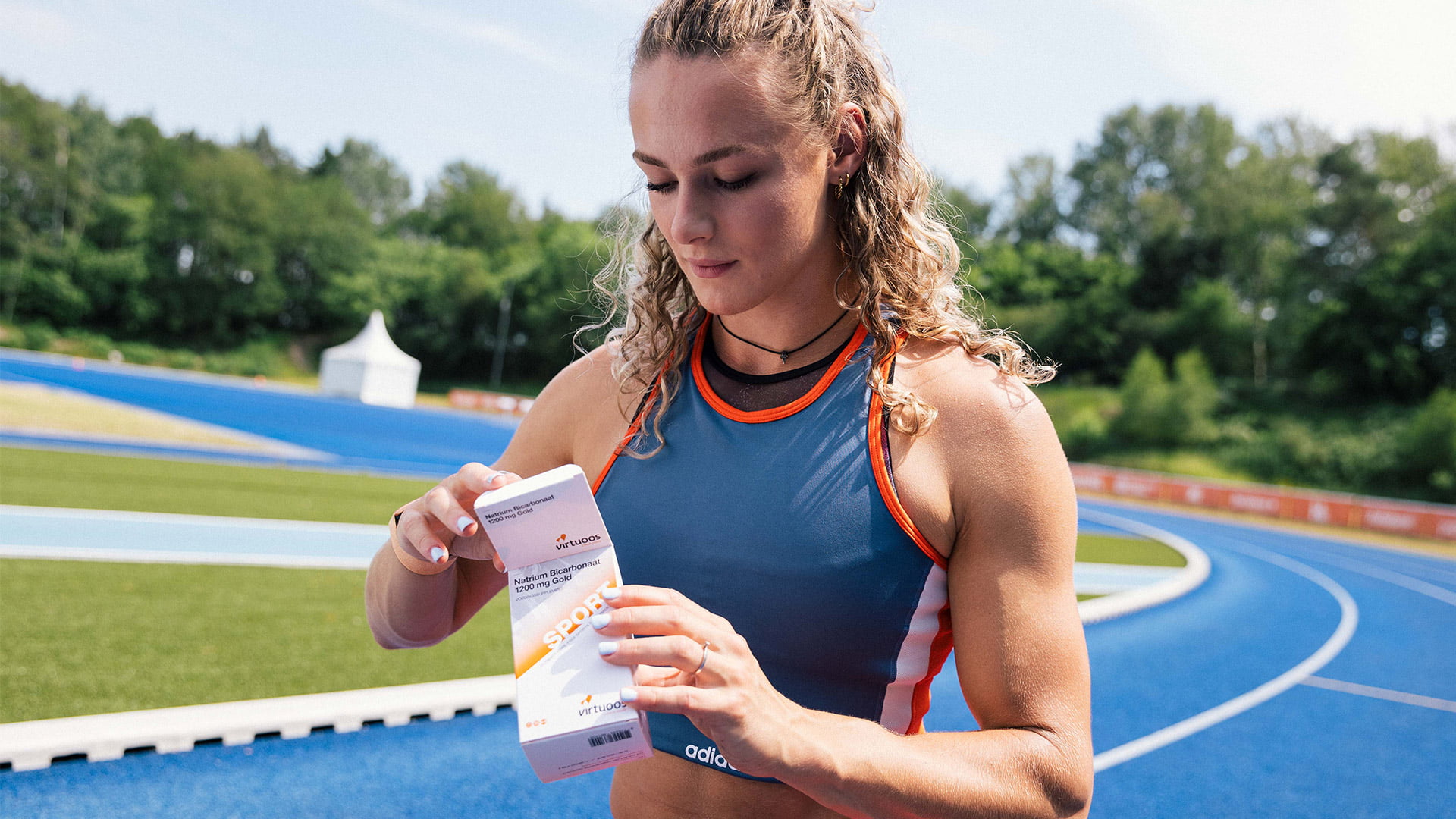 Since December 2012 we are only allowed to publish product data sheets and product information that contain approved health claims by a European scientific organization – as a result of the European regulations on nutrient claims. This limits Virtuoos’ ability to provide information, as many health effects of diets and dietary supplements are (still) not recognized by this organization as sufficiently scientifically substantiated.